Jack Connolly of Sioux City witnessed the A bomb test on Bikini Atoll while stationed on the USS Cumberland Sound during WWII. Connolly is shown in h

SIOUX CITY -- Jack Connolly stood on deck, covering his eyes with both hands.

Jack Connolly of Sioux City witnessed the A bomb test on Bikini Atoll while stationed on the USS Cumberland Sound during WWII. Connolly is shown in his Sioux City home reading a letter he had written to his parents after the test. (Staff photo by Tim Hynds)

"We were on the deck. No glasses. You could almost see through your fingers. I mean, it almost looked like an X-ray, it seemed to me like. Maybe it was just due to the fact that I parted my fingers like this. But I could almost see the bones in my hand," he said.

The date was July 25, 1946, and on the deck of the USS Cumberland Sound, Connolly, a 17-year-old Navy seaman, was witnessing his second atomic bomb test.

The test that day was the second one that month for Operation Crossroads, in which Connolly was a participant. The Baker bomb detonated 90 feet underwater under a target array of older U.S. capital ships, three captured German and Japanese ships plus a large number of auxiliary vessels -- those that had not already been sunk by the Able bomb that he saw detonated July 1 about 520 feet above the water in Bikini Lagoon in the South Pacific.

When a B-29 dropped the Able bomb, the Cumberland Sound was about 14 miles away. The ship was 17 or 18 miles away from the Baker blast.

These were the second and third nuclear weapon explosions ever, Connolly noted. The first atomic bomb test, Trinity, was on July 16, 1945, in the desert near Los Alamos, N.M. The second and third bombs were dropped on the Japanese cities of Hiroshima and Nagasaki in August, effectively ending World War II.

Young Jack, a native of Jefferson, S.D., enlisted in the Navy that December. With the war threat over, he took a "minority cruise" of two years but not an uneventful one.

He left San Diego in the spring of 1946 aboard the USS Fremont APA-44. In Hawaii, he transferred to the Cumberland Sound, a seaplane tender, which then proceeded to Bikini Atoll, arriving in June. Bikini's native population had been relocated.

Sometime after leaving Pearl Harbor, a loud speaker alerted the crew about its mission. But no one was too concerned about radiation or anything else. They were young, and nobody at that time really knew that much about it, he said.

"Everybody was thinking, well, maybe they're going to blow up the sky or poison the ocean forever. They just decided the less thought, the better," Connolly said. "And as kids, young guys, you know, we didn't pay much attention to that because we didn't know what the scare was until later."

Jack gets an eyeful

Government officials would contact him over the years, inquiring about his health, but the only concern he had was about his eyes. Officials had warned him that watching the blasts would create cataracts, and he had them in both eyes, But the cataracts have since been removed, and his vision is "pretty fair," he said. He has had no seeming ill effects from the radiation poisoning he must have experienced. He said he has had more health problems from the asbestos he used to work around in Sioux City, where he got married and raised a family after his Navy days ended.

Even the top scientists who created the bombs must not have been too concerned. Connolly noted that nuclear scientists Marshall Holloway, Edward Teller and J. Robert Oppenheimer were among the guests aboard the Cumberland Sound throughout Operation Crossroads.

Though sailors weren't allowed to smoke on deck, many of the scientists smoked at will, he noted. "And they were strange-looking guys, believe me," he said. "There was one, I believe it was Holloway, he had a big handlebar moustache that was sticking out both sides."

An even more critical -- and secretive -- guest was the Baker bomb itself. Some time after the Able test, Connolly and another sailor were climbing down a ladder when they noticed a "big ball" through a hatch window. The ball, identical to the bomb used in the famous Trinity test, was in a special compartment of the ship. Rumors, later confirmed, were that the ship's big seaplane crane unloaded the Baker bomb during the night for the test explosion. The Cumberland Sound had been converted to a laboratory ship, with a timing control room from which the bomb was detonated by radio impulse.

The Able test took place on a clear morning, with a calm sea and bluer-than-blue sky, Connolly said. Connolly was a fireman in the ship's fireroom, but since he was off duty, he was able to go topside to witness the blast.

"And when it did go off, there was a giant mushroom cloud, and it had fire on the inside and lightning. And a halo on top, like where it pushed the atmosphere up and it froze," he said. "We heard there were chunks of ice that came down from the atmosphere."

In a letter to his parents dated July 5, Connolly wrote: "We have been very busy the past few days. It sure is good to have some things going on. I suppose there's a lot of talk about the A-bomb test. Well, everything went as planned. I saw the whole deal and it looked as if the sun fell into the ocean. Then a large cloud of smoke arose. And when we went back, we saw the ship Independence was badly damaged and on fire also. A few others were sunk. It didn't do as much as we expected. Perhaps the next one will be worse."

Sometime after the testing, when Connolly was back in the States, he and a buddy went on board the aircraft carrier USS Independence, one of the test array ships that had been damaged and "burned to a crisp" by the A-bomb blasts. The ship had been towed home for study. "We just got on it as kind of a lark or something, myself and another guy," he said. "Just to see what it looked like. And there weren't any barriers that said radiation poison or anything."

A Catholic, perhaps his devotion and prayers to St. Anthony have kept him safe. He is positive prayers helped him recover that 1946 letter to his parents, which had been misplaced for many years.

The facts
Operation Crossroads was an atmospheric nuclear weapon test series conducted in the Marshall islands in the summer of 1946. The series was to study the effects of such weapons on ships, equipment and material. A target fleet of more than 90 vessels was assembled in Bikini Lagoon that included three captured German and Japanese ships. One was the Japanese battleship Nagato, Admiral Yamamoto's flagship. Another was the German cruiser Prinz Eugen. Among the American ships were the heavy cruiser USS Pensacola, light carrier USS Independence and destroyer USS Hughes.

The series consisted of two detonations: Able on July 1, Baker on July 25. A third scheduled test, Charlie, was canceled because the target fleet had been much more heavily contaminated than had been expected. Able detonated at an altitude of 520 feet. Baker detonated 90 feet underwater. Each detonation had a force of 23 kilotons of TNT.
Military equipment was arrayed on some of the target ships. Technical experiments were also conducted, some involving the use of live animals.
The support fleet of more than 150 ships provided quarters, experimental stations and workshops for most of the 42,000 men of Joint Task Force 1. More than 37,000 of then were Navy personnel.

The surviving target fleet was later towed to Kwajalein Atoll for study. Eight of the major ships and two submarines were towed back to the United States and Hawaii for radiological inspection.
The support ships were decontaminated as necessary and received a radiological clearance before they could return to the fleet.
Posted by Gregornot at 10:03 AM

Why Leave Comments- We can all Win through OPEN discussion 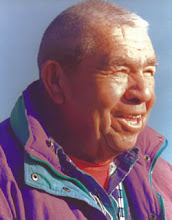 July 10, 2007 (TurtleIsland). Corbin Harney Spiritual Leader of the Western Shoshone Nation crossed over at 11:00 a.m. this morning in a house on a sacred mountain near Santa Rosa, CA (Turtle Island). He had dedicated his life to fighting the nuclear testing and dumping.

That battle claimed his life through cancer.

According to witnesses present, in the morning fog, the spirits of four Shoshone dog soldiers were outside on horseback before Corbin’s passing. But then one of the Shoshone present, Santiago Lozada, yelled “Tosawi Tosawi!” (White Knife). And then the fog shifted and there were thousands of spirits waiting.

Corbin passed peacefully at the end. He was only worried that he still had more to do. When he finally let go and went with the dog soldiers, Red Wolf Pope, grandson of Rolling Thunder, was present and sang him the Tosawi death song to call the dog soldiers to come take him home. Golden eagles continue to circle the house hours after his crossing.”

True to form Corbin joked around several days ago that he was going to go at 11:00, and kept his promise.

Over his lifetime, Corbin traveled around the world as a speaker, healer and spiritual leader with a profound spiritual and environmental message for all. He received numerous national and international awards and spoke before the United Nations in Geneva, Switzerland.

Corbin also authored two books: “The Way It Is: One Water, One Air, One Earth” (Blue Dolphin Publishing, 1995) and a forthcoming book, “The Nature Way”. Numerous documentaries have been made about his work and message.

In 1994, Corbin established the Shundahai Network to work with people and organizations to respond to spiritual and environmental concerns on nuclear issues. He also established Poo Ha Bah, a native healing center located in Tecopa Springs, California. He will be missed but always honored for his work and dedication to traditional ways.

Corbin Harney is descended from generations of Newe (Shoshone) traditional healers and was always grateful for the many extraordinary teachers who shared their knowledge in his lifetime.

Corbin is survived by his daughter Reynaulda Taylor; granddaughters Ann Taylor and Nada Leno; grandsons Keith, Jon and Joel Leno and William Henry Taylor; seven great-grandchildren; two great-great grandchildren; and his sister Rosie Blossom’s family and many cousins and other family members as well as many, many friends around the world. Corbin was preceded in death by his mother, father, sister, grandparents, uncle, great granddaughter, cousins, and friends. A very special thanks to Patricia Davidson, Corbin’s caregiver in his final months; Dominic Daileda, Corbin’s friend and companion for his support and compassion in hard times, and the family of Dixie and Martin van der Kamp for opening up their home and their hearts to Corbin and his family and friends during his time of need.

Dates and times for services are being made with official announcement to follow. Three day services are planned at the home of Larson R. Bill, So Ho Bee – Newe Sogobe (Lee, Nevada –Western Shoshone Territory) with burial services at Battle Mountain Indian Community, Battle Mountain Nevada.

Gregor, which is short for GregorNot